Last week I introduced you to the singular, iconic and time-honored tradition of the Buckeye Grove. Every Buckeye who has ever received All-American status is honored with their very own buckeye tree and a commemorative plaque. Summers heat or winters cold, these men of lore are forever immortalized in the Buckeye Grove. This week I am going to take a closer look at eleven special warriors, a Buckeye from each decade from 1910 to the present; A man who perfectly embodies what it means to be a Buckeye. Before we meet these eleven warriors, let’s look at two renowned Buckeyes, men of the “greatest generation,” whose careers were cut short at OSU by WW2.

Dante Lavelli (February 23, 1923-January 20, 2009) Dante Lavelli, the son of Italian Immigrants, grew up in the North-eastern town of Hudson, Ohio. Nicknamed “Gluefingers,” Lavelli developed his catching ability by catching ping pong balls and throwing baseballs against the wall bare handed, and catching them as they bounced back.  Lavellis playing time at OSU, however, was limited as he battled injuries during his brief sojourn.  After the 1942 season at OSU, Lavelli was drafted by the U.S Army and was sent to WW2 with the 28th Infantry Division. Lavelli’s division landed on Omaha beach, and he was later involved in Germanys Battle of the Bulge and the Siege of Bastogne. Additionally, Lavelli was an important part of the Cleveland Browns, as they won seven championships during his eleven-year professional career. He was indicted into the NFL Hall of Fame in 1975. 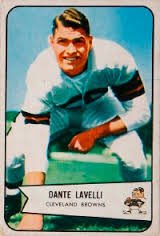 Lou Groza (January 25, 1924-November 29, 2000) Lou “The Toe” Groza was an American field goal kicker and offensive tackle who played his entire career with the Cleveland Browns. Groza revolutionized the field goal position as he regularly kicked field goals over 50 yards at a time when doing so was very rare.  Groza’s college career was cut short, as he enlisted in the Army to serve in the 96th Infantry Division in WW2. Groza served as a surgical technician in Okinawa and other places in the Pacific theater for his entire career in the Army. After his stint in the army, Groza went on to play in 21 seasons in the NFL. He retired holding career records in points scored, field goals made, and extra points made. Groza was inducted into the NFL Hall of Fame in 1974. 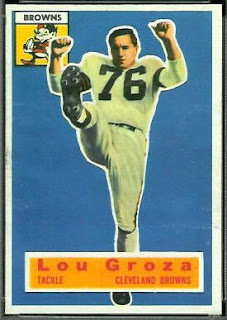 Boyd Cherry (1914) If you asked most diehard Buckeye fans who the first All-American in OSU history was, most would probably say Chic Harley. The honor, however, falls to Boyd Cherry of Newark, Ohio. Cherry was a two-sport star at OSU, playing both football and basketball.  In 1914, in addition to All-American honors, Cherry became the first Buckeye to be all conference as well. Cherry graduated from OSU in 1915 and went on to work for Kinnear Manufacturing Company for over 25 years. 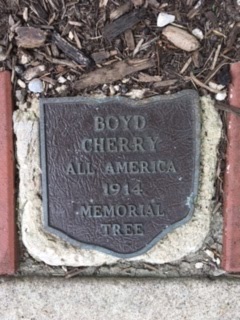 Iolas Huffman (1920,1921) Iolas Huffman was born in Chandlersville, Ohio and enrolled in the medical college at OSU.  Another two-sport star, Huffman played both football and baseball at OSU. A two-time All-American, Huffman was captain of the 1920 team which won the Western conference. Huffman went on to play professional football in the early years of the NFL with the Buffalo Bison and Cleveland Indians. 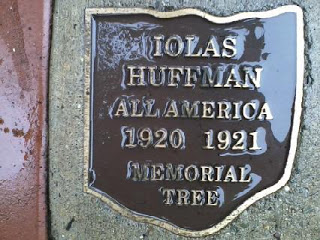 Lew Hinchman (1930, 1931, 1932): There is very little information available on Lew Hinchman, which is surprising for a three time All-American. Hinchman, a graduate of Columbus North high school, was voted captain and Team MVP his senior season. Hinchman’s accomplishments were somewhat overshadowed by Wes Fesler, and Dick Larkins, who went on to be an OSU coach and OSU athletic director, respectively. Hinchman put the two sport stars to shame, as he lettered in football, basketball, baseball and golf. 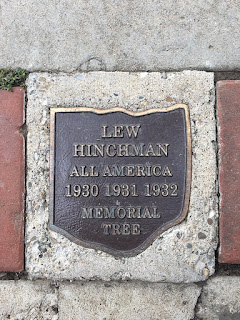 Dr. Warren Amling (1945,1946) Dr. Amling played both football and basketball for the Buckeyes from 1944-1946. Interestingly, Amling became a consensus All-American at two different positions, guard and tackle.  Also, of note Dr. Amling played basketball for Ohio State, becoming the only member of the College Football HOF to start in a Final Four un basketball. Amling turned down a chance to play for the New York Giants, and pursued his passion of Veterinary Medicine. He went on to serve on the Board of Directors at Wittenberg. 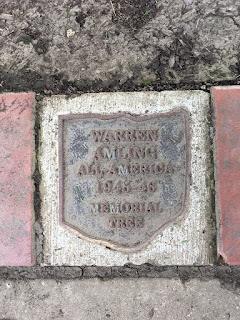 Jim Houston (1958,1959) After Jim Houston’s playing days at OSU were over, He went on to play thirteen seasons for the Cleveland Browns. Houston played on the 1964 Browns championship team alongside all-time great Jim Brown. Houston’s first attempt at playing football however were thwarted as he was cut from his 7th grade football team. Undaunted by this early setback, he went on to be inducted into the college football Hall of Fame in 2006. 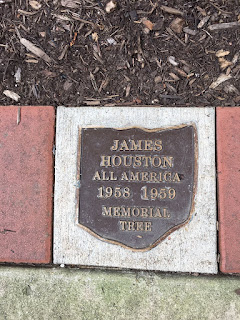 Jack Tatum (1969,1970) Jack Tatum, popularly known as, “The Assassin” was known as one of the hardest hitting safeties in the history of the NFL. Tatum played ten seasons with both with the Oakland Raiders and Houston Oilers, earning consecutive Pro-Bowl honors from 1973-1975. Jim Tressel instituted the “Jack Tatum hit of the week” honor and bestowed it upon a deserving Buckeye. Tressel also required that all his players read the book, They Call Me Assassin (which I highly recommend).  In Tatum’s latter years, he battled diabetes, finally succumbing to the disease in July of 2010. 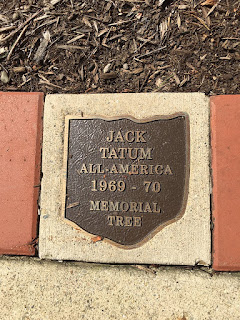 Tom Skladany (1974,1975,1976) Coming out of high school, Tom Skladany was widely considered to be the best overall kicker in the nation. In 1972, Skladany was the first specialist to be rewarded with a scholarship in Big Ten History. Skladany went on to become a three time all-America at OSU from 1974-1976). Along with Ray Guy, he is considered one of the best college football punters of all time. After his playing days were over, Tom opened an American Speedy Printing Center in Columbus, Ohio. He also served as past president of the Ohio chapter of the NFL Alumni Association from 1989-2013. 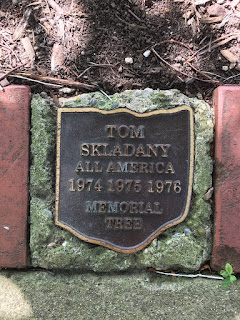 Chris Spielman (1986,1987) No one embodies the true meaning of what it means to be a Buckeye than Chris Spielman. Growing up in Massillon, Spielman was a high school legend, becoming the first high school player to have his picture on the front of the Wheaties Box. In an interview, Spielman recalled the time he told his dad he wanted to play for the team up North. His father replied,” Better no go there (Michigan). Don’t ever come home if you do.” He went on to become a two time all American at OSU and a three time All pro with the Detroit Lions. In 1998, Spielman took a year off from football to support his wife Stephanie who was battling breast cancer. Chris shaved his head in solidarity with his wife as she went through chemotherapy. A no nonsense broadcaster, Spielman will be working for Fox Sports covering college and NFL football this upcoming season. 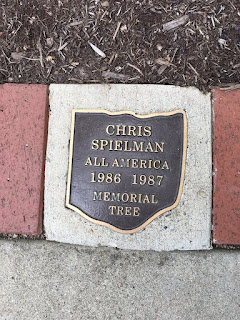 Korey Stringer (1993,1994) Korey Stringer was a mountain of a man from Warren, Ohio. Paired with Hall of Fame lineman Orlando Pace for the 1994 season, the Buckeyes had arguably one of the best offensive lines in the history of college football. After earning Pro bowl honors in his sixth season with the Vikings, Stringer’s promising professional career was tragically cut short by complications from heat stroke. His death served as the impetus for major changes in heat stroke prevention throughout the NFL. His legacy the Korey Stringer Institute was later founded to prevent incidences like this from ever happening again. 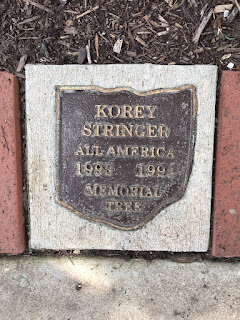 Will Smith (2003) Will Smith was brought up in Utica, New York and was ranked as the best defensive line prospect in the state with a total of 20 sacks.  Smith was a four-year letterman helping to lead the Buckeyes to the 2002 BCS National Championship and earning an All-America nod along the way.  Additionally, he was part of the New Orleans Saints first and only Super Bowl championship of 2009. Smith was tragically shot and killed during a road rage incident in 2016.  He was beloved for his charity work in the New Orleans area, including the Where There’s a Will charity dinner and Santa With the Smiths, a dinner for underprivileged kids. 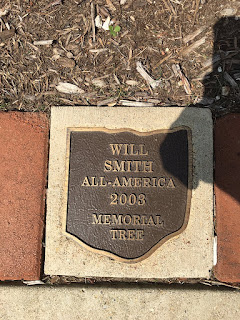 Ryan Shazier (2013) Out of high school, Ryan Shazier had originally committed to play for Urban Meyer at Florida. After Meyers resignation due to health reasons, Shazier went to play for Jim Tressel at Ohio State. Things came full circle as Meyer then replaced Tressel after his resignation and Shazier was reunited with Meyer. Shazier was an early entrant to the NFL and was drafted in the first round by the Pittsburgh Steelers. A linebacker known for his blazing speed, Shazier won a footrace against his teammates and wide receivers Antonio Brown, Markus Wheaton, and Sammie Coates.  Shazier also suffers from a rare autoimmune disease called alopecia areata in which he is unable to grow any hair on his body. Often the subject of ridicule when he was growing up, Shazier has learned to handle it graciously and now helps other athletes and people afflicted with the condition. 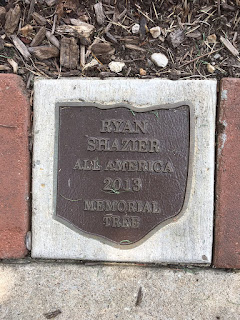 Maintaining the picturesque landscaping of the Grove, with 186 buckeye trees and commemorative plaques, doesn’t come easy.  Scarlet Key was responsible for planting the first eleven trees until Ohio Staters, Inc., took over the responsibilities in 1955. It’s unclear exactly when Ohio Staters, Inc. relinquished the reins to the Grove, but those duties have now passed to the OSU Facilities Operations and Development. I’m not posting the following pictures to shame the FOD, but to emphasize how important it is to maintain a watchful eye of our most treasured traditions. Because without this vigilance, our traditions would be relegated to the ash heap of history. We contacted the FOD and were told that Mike Sensibaugh and John Brockington’s plaques, as well as the plaques from the last three years, are currently on order. 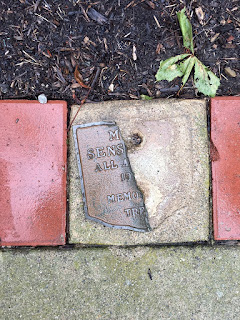 So far, I have touched on the qualifications, overall layout of the Grove and other noteworthy aspects. This week I looked at two Hall of Famers who had their OSU careers cut short by WW2, and eleven special warriors who embody the spirit of what it means to be a Buckeye. I discussed the importance of being vigilant and guarding the sacred treasures of OSU traditions. Next week in my final segment, I will share a special, generational story about a father and his son, whose lives were forever intertwined with their shared love for OSU.

“Though age may dim our mem’ry’s store
We’ll think of happy days of yore
True to friend and frank to foe.” Carmen Ohio
As sturdy sons of Ohio

Posted by Nick Jackson at 10:11 AM No comments: