“In old Ohio (Columbus) there’s a team,
That’s known throughout the land;
Eleven warriors, brave and bold,
Whose fame will forever stand.”

Located behind the South Stadium stands, and up a couple of steps lies one of the most singular and iconic of Buckeye traditions, the Buckeye Grove. The grove is situated in a quiet haven between the south stands, Morrill Tower, and the tennis courts. There are no signs pointing the way to the Grove, only the entryway, so it’s easy to miss. It is my sincere hope that this article will inspire you to visit the Grove and that it will become a “can’t miss” destination. If you can’t make it there in person, I’ll do my best to guide you along on my personal journey through the Grove.

“His fame will forever stand.” Those words echoed quietly in my mind as I made my way up to the entryway of the Grove. Since 1929, Buckeye trees have been planted in honor of every All-American football player to ever don the Scarlet and Gray. 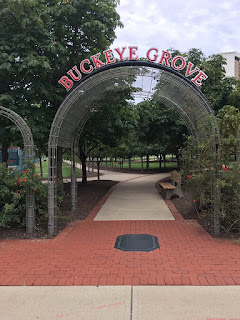 According to Doug Lesmerises of the Cleveland Plain Dealer, the NCAA has five All-American teams to determine consensus All-Americans, “Associated Press, American Football Coaches Association, Football Writers Association of America, The Sporting News and the Walter Camp Football Foundation.  Ohio State, however, does not limit itself to those organizations when handing out trees. The threshold for Buckeye Grove is one first-team appearance on any reputable, mainstream All-American team.” (Doug Lesmerises, How Exactly Does an Ohio Football Star Get a Tree in the Buckeye Grove, Cleveland Plain Dealer, May 12, 2014)

Once a Buckeye reaches this All-American threshold, they will be honored with their very own Buckeye tree. Each tree has an accompanying plaque which denotes the player and the year he received the honor. 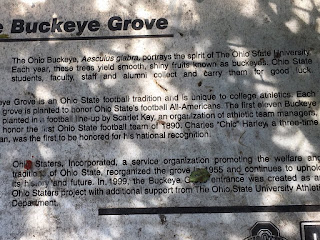 A member of the Horse chestnut family, the Buckeye tree was officially adopted as the state tree on Oct. 2, 1953. The botanical name for the Ohio Buckeye is Aesculus glabra. Swedish Botanist, Carl von Linne coined the name Aesculus, naming it after the Greek god “Aesculapius,” the god of medicine (because of its many medicinal properties).  Distinguished from the Cannabis leaf which has seven leaves, the Buckeye tree leaf has five leaves and was thought to resemble, “praying hands” by poet Albrecht Duerer. 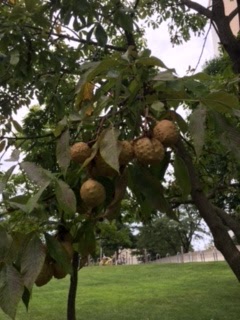 Native Americans observed the glossy brown nature of the nut with a lighter circular eye, and coined the term Buckeye, because it looked like eye of a male deer, or buck. The Buckeye nut was used by early explorers for both its medicinal and its talismanic properties (they believed it provided wisdom). Extracts from the nut were used in cerebrospinal treatments and for the treatment of rheumatism; Hence the reason the Buckeye was carried in the early travelers’ pockets, for both good luck and good health (ODNR Division of Forestry website). Every fall, fans of all ages continue this time-honored tradition, flocking to pick up their lucky Buckeye to carry with them.

Immediately upon entering the Grove, you will find the first two plaques to your right and to your left; those of All-Americans Chic Harley and Boyd Cherry, respectively. There are 186 more plaques, so make sure you walk slowly and take the time to appreciate each plaque, as each one tells a unique story. I wish I had the time to write 186 stories for each plaque in the Grove, but time and circumstance only allow me to give but a small glimpse of the Grove.  Give yourself plenty of time to work your way through the park, because it’s a lot bigger than you would think. 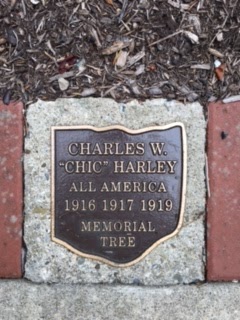 There is one note I would like to make before we get into the heart of the Grove. The trees and accompanying plaques are laid out in chronological order. I would suggest spending just as much time in the first part of the Grove, as you do in the most recent additions. I would argue that some of the older, less well-known players, are even more important than the well-known Heisman winners. Without their sacrifice, the latter Heisman winners may never have occurred. I adjure you to spend as much time learning about Merle Wendt, Cyril Myers and Iolas Huffman as you would Eddie George, Shawn Springs and Orlando Pace. 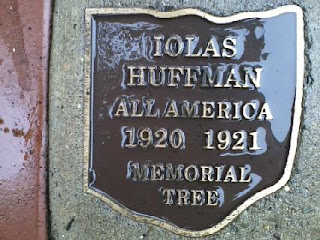 After spending some time examining some of the older, less well-known players, continue on your way. Be on the lookout for OSU’s seven Heisman Trophy winners (Compared to That Team Up North with three) represented in the Grove: Les Horvath in 1944, Vic Janowicz in 1950, Howard Cassady in 1955, Archie Griffin 1974, Archie Griffin in 1975, Eddie George in 1995, and Troy Smith in 2006. 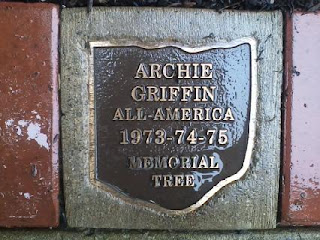 Out of the ten Hall of Famers only three have All-American plaques: Cris Carter (1986), Orlando Pace (1995-96), and Jim Parker (1956). As is often the case, duty calls and Lou Groza and Dante Lavelli were ushered off to fight for our freedoms in WW2, never receiving an All- American plaque.(Perhaps they could receive honorary plaques in the future?)

Now that we’ve had a glimpse of the past, let’s get up to speed in the present, and then look ahead to what is coming. The most recent nameplates to be installed were Bradley Roby, Ryan Shazier, Johnathan Hankins, and Jack Mewhort. Currently, there are 12 trees planted that do not have nameplates, with 8 Buckeyes still waiting for their plaques: Joey Bosa and Michael Bennett for 2014,  Joey Bosa, Taylor Decker, Vonn Bell, and Adolphus Washington from 2015, and Curtis Samuel, Pat Elflein and Malik Hooker from 2016. 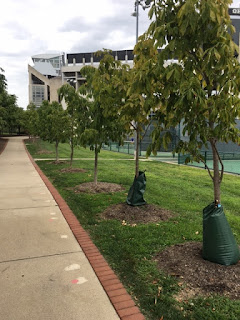 This pristine, refuge of Buckeye glory does not take care of itself. It takes the coordinated efforts of many volunteers, the athletic department, alumni, and even current Buckeye players. The first eleven Buckeye trees were planted by Scarlet Key, an organization of athletic team managers in 1929 in honor of the first football team in OSU history, the 1890 team. Charles “Chic” Harley, a three time all American, was the first player to be honored with a plaque, an honor well deserved.

The Ohio Staters, Inc., a student led service organization founded during the Great Depression, took over the reins of responsibility in 1955. Since then, they have been responsible for caring for and preserving the Grove, as well as shaping and directing its future. Ohio Staters expanded in 2002 to form the Ohio Staters Alumni Society. The organization provides an avenue for students to take an active role in preserving and promoting Ohio State’s finest traditions, among them the Buckeye Grove.

Every spring, the Grove gets an infusion of manpower, as the ‘losers’ of the annual Scarlet and Gray spring game are responsible for landscaping and mulching the Grove. This is a chance for the current players to learn about OSU’s storied past, and begin to pay back those who came before them. 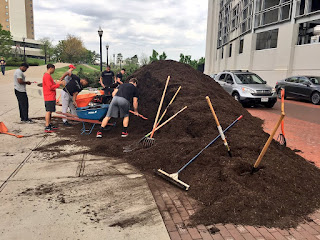 One regret I have is that I only spent an hour at the Grove. Every stone tells a story and every plaque depicts a person. Oh, that we slowed down enough, and took the time to learn these men’s stories! I remarked to my friend that I would love to sit down on one of the benches amidst all this beauty, and study and reflect.

It’s amazing that there can be such serenity amidst so much bustle and activity. I encourage you to make every effort to visit; Set aside a few hours on game day, and make the sojourn to the beautiful Buckeye Grove. You won’t be disappointed. 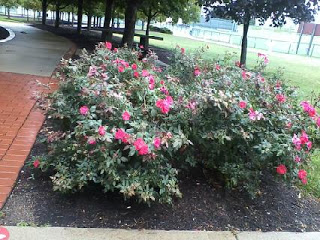 Next week we will take a closer look at some of these stories, some of the people behind the plaques. We will look at fathers, war heroes, men of renown, yet imperfect men. I will share a special story of a man who came to the Grove for a very distinct and significant purpose. I’ll leave you some more fitting words to the immortal and timeless Buckeye Battle Cry:

‘We’ll scatter to the east and west,
When College Days are done;
And memories will cling around
The Dreams of Everyone.”