“What man of you, having a hundred sheep, if he loses one of them, does not leave the ninety-nine in the wilderness and go after the one which is lost until he finds it?  (Luke 4:5)

Rod Gerald would be the first to admit that his life has taken a winding course. Rod never met his grandfather as he passed when his father was just two years old. Rod’s father was the son of sharecroppers in Tunis, Texas. He eventually left home and joined the army before settling down as a meat cutter. The same year that Rod was born, Mr. Gerald was called into the ministry; a call which he quickly accepted.

Born in 1956, Rod was the fourth boy in the Gerald family, a family that was used to going without material things. His first of three sisters was born in 1960.  Though difficult to afford, Rod’s father moved the family to a bigger house in a better area to provide a safer environment for the kids to grow up in. Life for the Gerald’s, consisted of church every Sunday. The kids were responsible for cleaning the church every day and cutting the church lawn. It was these humble beginnings and early underpinnings of structure, humility and love that would help shape Rod’s personality.

A blazing quarterback/defensive back with 4.3 speed, Rod initially chose a school from each of the Southern conferences and left out the Big Ten. OSU coach Woody Hayes came in late and changed his whole recruitment. “The head coach from Tennessee was there in Dallas at my dad’s church. We were ready to sign, and Woody came in and changed the whole game.”


OSU had always been Rod’s favorite with players like John Brockington, Jim Otis and Rex Kern. Being from Texas, Rod was used to big rivalries. They decided to wait on his decision and went up as a family for the OSU-Michigan rivalry game in November. There they had a chance to meet Archie Griffin and Cornelius Green and in Rod’s words, “It wasn’t a hard sell.” 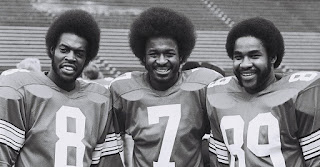 At 175 lbs., Rod took a chance in coming to OSU knowing he would have to run the ball a lot. “Running the ball that much, you are going to get hit. I liked running the ball, I liked the contact and liked to think I could run over guys.”  Rod’s freshman year he led the scout team as QB and ran all over the first team defense, setting the stage for him to start at QB his sophomore year. The Buckeyes had a stellar year in 1975 but ended with the disappointing loss in the Rose Bowl to UCLA.

It was a loss that according to Rod, Woody took very hard.  Many thought Woody would retire after that season, but perhaps not wanting to end his career on a loss returned for the next season. Buckeye greats Archie Griffin, Tim Fox and Cornelius Green graduated and thus began a new era of OSU football with Rod Gerald at the helm. 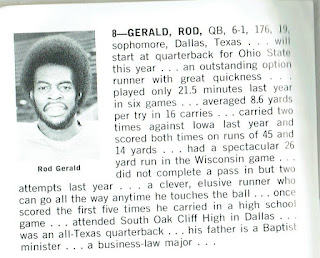 The Rod Gerald led Buckeyes started out 4-1-1 and were ranked as one of the top teams in the country. During homecoming against Purdue, however, Rod was about to be tested more than any other time in his life.  In Rod’s words, “Pain and injury are part of the game.”  He had dealt with injuries before and had always bounced back but this was different.

Rod was hit on an option play in the first quarter by Rock Supan of Purdue, a moment which Rod remembers vividly, “He hit me and I laid and it was a pain a had never felt. Dr. Bob Murphy (team physician) and Billy Hill (OSU team trainer) put me on the cart and drove me off.”

Rod ended up fracturing three transverse processes in his spine and was laid up in the hospital for a week. He recalls his teammate Greg Storer visiting him that first night, “He brought me some McDonalds. He was a 6’7’ tight end and was about as nice as you could be.” The injury was just the start of the many trials that Rod would face, some self-inflicted, but many stemming from the pain and chronic nature of his original injury.

While Rod was sidelined with his injury, OSU continued its winning ways with Senior Jim Pacenta at the helm. Pacenta was known as more of a passing QB, and many fans had wanted OSU’s offense to evolve into more of a passing team. The Buckeyes rattled off three straight wins until being blanked 22-0 to Michigan. “Woody had a fit. There was no doubt I was gonna play that next game. He didn’t care what condition I was in.” 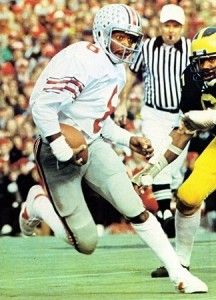 Rod, however, was having doubts about even being able to play again for OSU. After a film session with Ron Springs, Woody called them both into his office and said he was going to go back to the running and option attack again and that Rod would be playing in the Orange Bowl. Rod told Coach Hayes he was not going to go and Woody went nuts, “After he threw some desks and some books, I said ‘Okay I’m going, I’m going!’”

OSU started out down 10-0 against Colorado at which point Woody inserted Rod. Gerald sparked OSU with a 17-yard run leading to a touchdown by Jeff Logan.  OSU went on to win 27-10 with Rod being named the back of the game with 14 rushes for 81 yards and a TD. 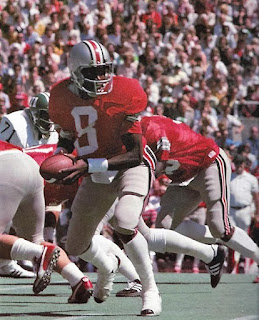 In 1977, with Gerald still not himself and battling lingering pain from his initial injury, the Buckeyes went on to finish with a 9-3 season, with losses to Oklahoma, Michigan and then Alabama in the Sugar Bowl. With a poor showing against Alabama, it was a not very well-kept secret that wunderkind Art Schlichter would be taking the reins of the OSU offense the next year.

Rod returned to a divided locker room.  Knowing how much pain he was having, Rod welcomed Art starting. The seniors who loved Rod, however, felt like they were doing him wrong by starting the freshman Schlichter. As a compromise, Woody moved Rod to wide receiver which led to one of his favorite moments as a Buckeye versus Penn State, “Both Art and I went on the field at the same time and the stadium went nuts, and that was just great.”

In 1986, a writer for the Columbus Dispatch wrote an expose on drug use at OSU. Rod agreed to speak with the writer of the Dispatch under the pretense that they would use his comments to help other Buckeyes to not make the same mistakes he had made.

The article ended up on the front page and included damning quotes from highly respected people like Dr. Bob Murphy and Woody Hayes about Gerald’s drug use while at Ohio State. Gerald quickly went from beloved Buckeye to a pariah in the eyes of Buckeye nation. Over 40 years have passed and some of the pain still lingers, “Buckeye nation, they’ve forgiven me, but the diehards, I don’t think they’ll ever forgive me for that.”

In the following summer, Rod felt so bad he was willing to stay in Texas, “I felt it was justified that I would be punished, I needed to be punished. I never thought I would be back in Ohio. I was willing to sacrifice because of what I had done.” Suffering the depression from his public shame and self-medicating his pain, Rod received a phone call that would take his life in a better direction.

Rod vividly recalls Woody reaching out to him that day, “Rod, you are going to go ahead and go back and finish and get that degree, right?” Rod didn’t know that day if he would, but he wasn’t going to tell Coach Hayes no again. Hayes pressed him to promise he would go back and said he was going to call him back in a week. 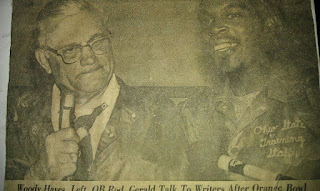 Unbeknownst to Rod at the time, Woody was very sick. That following Wednesday, it was reported that Coach Hayes had passed away.

Rod recalls his promise to Woody, “I didn’t care what condition I was in. Woody had the love for me to call and was interested in me getting back and getting my degree, I was going to do it.”

With $15 in his pocket, Rod stepped out in faith and left for Columbus. He didn't know, however, that he would soon be tested more than he had ever been in his entire life.