Next Saturday morning November 4th, a remarkable group of fourth graders will be holding a 5K Fun Run at Barrington Elementary School in Upper Arlington, OH to raise awareness to the symptoms of ovarian cancer, and to raise money in the fight against this “silent killer.”

Ovarian cancer is often called a “silent killer,” because its early symptoms are vague and the disease often goes undetected. It is often not diagnosed until it has reached its late stages and by then it is too late to treat, leading to death within about five years.

For two very special seniors at Upper Arlington High School the battle against ovarian cancer is personal. In November of 2008, then 3rd grader at Barrington Elementary, Molly O’Connor lost her beloved mother and member of the Upper Arlington community, Eileen O’Connor, to ovarian cancer.

The following April as a fourth grader, Molly saw Race for the Cure signs and wondered why they didn’t have a similar race and publicity for ovarian cancer.  It was at this point that she approached her fourth-grade teacher Katie Benton (Mrs. Benton was also her 3rd grade teacher) and asked her if they could hold a race for ovarian cancer.

Molly’s close friend, Dante Landolfi, also lost his precious grandmother Bonnie Masdea around the same time that Molly lost her mother. Both of their fourth-grade classes teamed up and with the help of their teachers, developed the idea of a race which they coined Beat Michigan! Beat Cancer! Racing to Beat Ovarian Cancer.

Mrs. Benton with Molly and Dante at the 2009 race 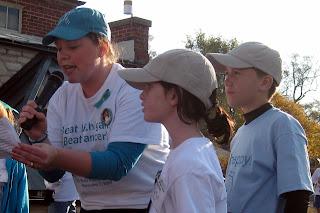 Barrington Elementary School is located in Upper Arlington which is a stone’s throw from The Ohio State University in Columbus, Ohio. Ohio Stadium attracts over 100,000 fans to home games so it was only natural to name the race after OSU’s biggest rival Michigan, since the race would be held two weeks before the annual OSU/Michigan Game.

The two classes also partnered with the Ovarian Cancer Alliance of Ohio and The Ohio State University James Cancer Hospital and Solove Research Institute which is located very close to Barrington.

Mrs. Benton spoke of the importance of their help at the time, “Representatives from the James Cancer Hospital came to our school to talk with the students about cancer, the importance of research, and the mission/vision of the research institute. Both partnering organizations played key roles as they interacted and educated the students before, during and after the event.”

With the entire Upper Arlington community galvanized, and due to the personal nature of this particular race, it was a rousing success. Typically, the first time a race is held for a lesser known cancer it makes a few thousand dollars and draws a few hundred people. The race drew over 900 racers and raised an astonishing $23,000 for ovarian cancer research.

Margot, a 4th grader at Barrington Elementary at the time, expressed the impact a group of motivated fourth graders can have, “You can’t underestimate what 4th graders can do. We raised more than $20,000. If our classes helped prevent one person from getting ovarian cancer, I am satisfied with what we did.”

The event was such a success that Mrs. Benton even mentioned that it was her hope that down the road it would inspire other service-learning projects and that students at Upper Arlington High School would even organize similar projects like this for their Senior Capstone Projects.

Her idea proved prophetic, as this is exactly what transpired. Dante, now a senior, approached Molly and suggested they bring back the Beat Michigan! Beat Cancer race for ovarian cancer as their Senior Capstone Project at Upper Arlington High School. The Senior Capstone Project is a graduation requirement at Upper Arlington and he wanted his project to be both significant and memorable.

Dante, Molly, and Mrs. Benton getting ready for this year's race 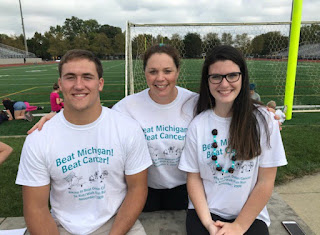 Dante and Molly both get the opportunity to work closely with Mrs. Benton’s 4th grade class. Dante spoke about the opportunity to mentor the 4th graders, “They absolutely love working for the project and its cool to see them learn the same lessons that I learned. That they can do practically anything if they set their mind to it.”

Mrs. Benton reinforced the importance of this real-world learning as a supplement to traditional classroom learning. “It’s called a service learning project. They are learning academic stuff and real-life skills while they are doing it, and it also lets kids really capitalize on their gifts and talents.”

Dante and Molly with the fourth grade class at Barrington Elementary 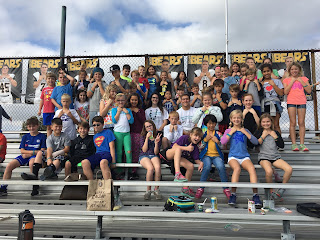 This year’s race is soon upon us and the excitement in the kids is palpable. The kids are busy using their gifts, making Buckeye necklaces and other crafts and items to sell for the race. Teal is the official color for ovarian cancer so look for there to be a lot of teal, and not just buckeye scarlet and gray.

On Monday, October 30th Barrington Elementary held a pep rally for the entire school to build momentum for the race and also to educate kids and staff on ovarian cancer. Dr. David Cohn, MD spoke at the rally. Dr. Cohn is a professor in the Department of Obstetrics and Gynecology and director of the Division of Gynecologic Oncology at The Ohio State University College of Medicine.

As mentioned earlier, the symptoms of ovarian cancer can be somewhat general and vague which often leads to a late diagnosis of the disease.

Dr. Cohn explained the diagnosis process of ovarian cancer, “Most ovarian cancers are diagnosed when its already spread. Stage 3 is the most common point of diagnosis, and the chance at cure is lower.”

He went on to explain some of the symptoms to be mindful of, “There are certainly symptoms of ovarian cancer and that includes abdominal bloating, abdominal pain, feeling full quickly, and changes in urinary and bowel movement habits as well.”

The ovarian cancer community sometimes uses the acronym B.E.A.T to generalize the early symptoms that may arise in a person with the disease.  “B” stands for bloating, “E” stands for eating less and feeling fuller, “A” stands for abdominal pain, and “T” stands for tell your general practitioner.

The key is if a woman notices these symptoms, to go to their physician immediately, so that if necessary they can conduct some kind of imaging with a pelvic ultrasound or a CT scan; as there is no current screening tool for ovarian cancer.

Dr. Cohn also discussed the importance of maintaining a normal weight, a physically active lifestyle and eating a diet rich in plant based products in order to help prevent the onset ovarian cancer, advice which we could all benefit from.

A common theme that was mentioned by everyone involved in the first race was that even if it just impacted one person, and saves just one life, then all their hard work will have been worth it.

This is indeed what happened. A woman who attended the race in 2009 went on to develop ovarian cancer. She credits the race and the efforts of the 4th grade class with helping her spot it early and saving her life. She is currently healthy and will be speaking to the 4th grade class and participating in this year’s race again.

It’s stories like this that has brought together the 4th graders and the Upper Arlington, and OSU community once again.

Abby Davis, a 4th grader at Barrington Elementary, put it very eloquently why you should come out and be a part of this year’s race: “It’s going to be so much fun. We have activities and raffle prizes and you will be supporting a great cause while helping raise awareness about the symptoms of ovarian cancer and raising money for a cure. Who doesn’t want to beat cancer?”

If you live in the Columbus area, please make every effort to go to the race this year either as a spectator, or as a participant. Click here for race details and where to donate.

The kids have worked hard to secure sponsors so that all proceeds will go to the Ovarian Cancer Research and Education in Gynecology Fund at OSUCC-The James.

If you are unable to go, please make an effort to educate yourself and your loved ones on the symptoms of ovarian cancer. You may never know the lives you will impact or save.

Perhaps one day, we can all say that we not only beat Michigan, but that we beat ovarian cancer too.