“Blessed is the one who perseveres under trial because, having stood the test, that person will receive the crown of life that the Lord has promised to those who love Him.” James 1:12

Rod Gerald left Texas and boarded a greyhound bus for Ohio with his wife, five-year-old daughter Natashia, and his son Casey who was six months old at the time.

Rod got a job at the Columbus Zoo and lived with a close friend and his family in Plain City. He then became the freshman basketball coach at Dublin Coffman leading them to a championship that first year. Additionally, Rod served as parking attendant for the school, a job which he loved dearly, as it gave him a chance to love and be an encouragement for kids.

One day, the principal called Rod into the office where he was surrounded by teachers and students. Rod remembers that day fondly, “It was my first Christmas away from home. They gave us so many toys for my kids. It took two cars and a van to get all those toys.”

Things were going great, but Rod had unfinished business.

Following through on his promise to Woody, Rod returned to OSU in 1988 and then received his degree from OSU in 1989. 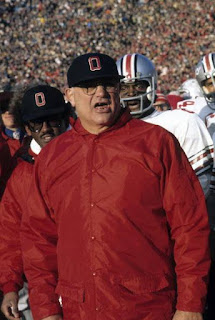 Rod then began working as a housing inspector for the city of Columbus, and got a chance to take his son Casey to Buckeye games and share his love for OSU.

In 1994, Rod’s brother died.  He experienced death in his family for the very first time. This led to a relapse into the world of drugs again, a propensity which had been developed from those early times at OSU trying to self-medicate his pain. Compounded by the death of his beloved father in 1998, Rod would then enter one of the darkest periods of his life.

Back in Dallas and away from the accountability he had established in Columbus, Rod dove headlong back into the underworld of drugs. He ended up selling the family home for drug money, became homeless, and spent 11 months in jail for burglary charges stemming from his drug use.

It wasn’t until he had hit rock bottom that any lasting substantive change would occur in Rod, “It’s God’s goodness that leads you to repentance. You don’t even see yourself. A lot of times we are so out of control, you don’t even think to repent. God knocks you down like Saul (who later became the Apostle Paul), and makes you see.”

For the next several years, Rod has walked the straight and narrow road, while working to repair his relationships with his family that he had hurt so much.

Rod’s trials, however, were far from over. Rod suffered from degenerative disk disease and spinal stenosis to his lumbar spine making it difficult to even walk and some days to even get out of bed. Compounded with his back injuries, Rod suffered a herniated disk in his cervical spine which led to searing pain in his neck to the point where he couldn’t even hold his head up.

Rod was decimated by these physical problems, and was unable to work and provide for himself anymore. Relying on a meager one thousand dollar a month disability check, Rod was in anguish both physically and mentally. It was at this low point in his life where Buckeye Nation reached out in love and picked Rod up again, to help him get back on his feet.

Paige King, a devout Buckeye fan from Circleville, OH but now living in Texas, reached out to Rod on social media. Rod is never one to complain and often refuses to ask for help, not wanting to be a burden on anyone. Paige’s love for Rod finally broke through his tough exterior. He now affectionately calls Paige “Coach” for her perseverance and persistence.

With the help of a local businessman Tony Reynolds, Paige developed the concept of Team Rod. Team Rod is a concept that no matter how low you get, you have people who love you and want the best for you; that you’re never alone in your fight.

Reynold’s set up a crowdfunding page to help pay for Rod’s surgery and expenses to make it back for his 40-year reunion in 2015 against Northern Illinois.  Rod’s old friends Archie Griffin and Cornelius Green were the first to donate to Team Rod. Buoyed by the love and support of his friends and love of Buckeye Nation, Rod made the trip to Columbus.

Rod shared his emotions leading up to that day in the Shoe, “It’s been an effort by the entire university, but it started out with one lady, it’s enough to make you cry.” (Jon Spencer, Gannett News services, Sept 16th, 2015.)

Buckeye Nation and his former teammates picked him up emotionally but also physically that day, “They were proud of me, happy to see me. They were carrying me around. I couldn’t go downstairs with that walker, they picked me up. They showed me a lot of love.” (Jon Spencer, Gannett News, Oct 17th, 2015)

Rod in the 'Shoe for the 40 year reunion

Rod didn’t know on that memorable day in the ‘Shoe that he had a staph infection from his neck surgery. He required another surgery to revise and clean out the infection which set him back a great deal.

On Thursday Oct. 12th, 2017, Rod had his third lumbar surgery and another small surgery to fix a component from his original neck surgery on his herniated disk. He is now home, in good spirits and on the road to recovery.

Being confined to a wheelchair, left Rod a long time to contemplate his legacy and what he wants to be remembered for.

A big part of Rod’s legacy is his children. Both Casey and Natashia graduated as valedictorians at South Oak Cliff High in Dallas. His youngest Casey went on to play defensive back at Yale, was a Rhodes scholar finalist in 2008, and then was chosen to speak at Harvard Business school’s graduation in 2014.

In addition to continuing his healing and reconciliation with his children, Rod wants to start earning an income again. He also believes God is calling him to public speaking. He wants to share his story with others to inspire them to not go down the same road he went; that no matter how low you go, God loves you and to never give up hope and always keep fighting.

Towards the end of the interview, Rod shared one of his favorite Bible verses, “Likewise the Spirit also helps us in our weaknesses. For we do not know what we should pray for as we ought, but the Spirit Himself makes intercession for us with groanings which cannot be uttered.” (Romans 8:26)

He confessed, “You can be saved by your consequences. You can turn your life around, but most of the time it’s that love that does it.”

Rod went on to emphasize the importance of friendship and accountability to stay clean, “It’s in my mind and it’s in my heart and its even in my way of living.  I can hang up right now from you and call Archie Griffin and call Corny (Cornelius Green).”

Rod in the 'Shoe with good friends Archie Griffin and Cornelius Green. Photo courtesy of NBC4 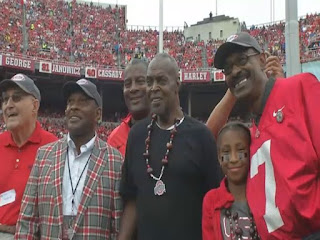 Rod finished the interview with his usual unassuming nature and humility, “Even in a wheelchair I have so much to be thankful for. God has been so merciful and good.”

He later texted, “God is better to me than I am to myself.”

Rod knows pain and suffering both in theory and experientially.

His whole life is a testimony of God’s love, mercy and forgiveness. He has come full circle as a son of a Baptist minister, to becoming the prodigal son and then being called home again through God’s love.

“And when he has found it, he lays it on his shoulders rejoicing. And when he comes home, he calls together his friends and neighbors, saying to them, ‘Rejoice with me, for I have found my sheep that was lost!’ I say to you that likewise there will be more joy in heaven over one sinner who repents, than over ninety-nine just persons who need repentance.” (Luke 4: 6-7)

Rod’s vision now is to take this message of love to others and that’s why his next chapters in his life may be his greatest.


Author's note: Rod just had his third back surgery on Oct. 12th. He is home recovering and walking! Donations can be made here to help Rod pay for the back surgery and physical therapy. Thank you!