"We're heart and soul for this stadium, the fellows who know what it is to go in there and fight with all that's in it for Ohio State and her glory." Charles “Chic” Harley
Before Ohio Stadium was built, most organized sports at OSU were dedicated to speed and running sports dating back to 1877.  A quarter mile of track ran from the current site of the chemistry complex south to 17th.   By 1890, a multi-use field for track, football and baseball had been constructed west of Neil Avenue and south of the present-day stadium.   Track and field, which was more popular than football at the time, outgrew that space over the course of the decade.
On November 1, 1890, Ohio State’s first home football game was held on a field in German Village where the Buckeyes lost to the College of Wooster by a score of 64-0... Within a decade, the team was playing on campus. In 1896, the University built its first gymnasium, the Armory, and the first campus football game was held at Ohio Field, at High and Woodruff, in 1898.   Within two decades, Ohio State had outgrown Ohio Field.
Following Ohio State’s back-to-back Western Conference (eventually the Big Ten) titles in 1916 and 1917, the necessity of constructing a large stadium became apparent. When Ohio State and Illinois met for the Western Conference championship in 1919, 20,000 people watched the game in the bleachers or along Ohio Field’s perimeter; an estimated 40,000 people stood farther out. Spectators broke down the field’s fence and sat on the turf; nearby homeowners put up bleachers on their roofs and charged admission.
With the advent of World War I, the campus was being crowded by new field artillery.   Infantry regiments of 3,000 men were housed on campus.  Plans for a new stadium were now put on hold.
University trustees reserved 92 acres west of Neil Avenue along the Olentangy River for the start of the stadium construction. Alumni were asked to raise one million dollars in a year. With the heart of the campaign called Stadium Week ran from October 16th to October 23rd.    On October 16th, a new plaster mock-up of the stadium was introduced.
OSU football star Chic Harley was instrumental in this campaign, so much so that Ohio Stadium is often called, “The House That Harley Built.”  In 1941, James Thurber described Harley's playing style, "It wasn't like Red Grange or Tom Harmon or anybody else. It was kind of a cross between music and cannon fire, and it brought your heart up under your ears." (Bob Hunter, "Chic-The extraordinary rise of Ohio State football and the tragic schoolboy who made it happen." Orange Frazer Press) 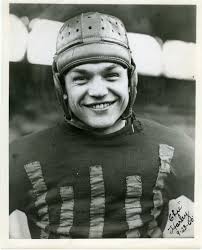 Built off the momentum from Harley’s exploits, campus turned busy with the fundraising campaign.  The student stadium committee had a map of Ohio’s 88 counties hung on the Armory. When the county met their pledge amount, the light bulb for that county was turned on.    Pledge quota on campus was met the fifth day of the drive. 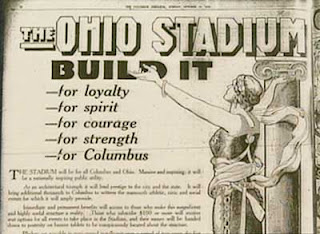 Howard Dwight Smith, an OSU alum and architect, was tapped to design the stadium.  He drew a U-shaped design, combining designs of the two biggest stadiums at that time; Harvard and Yale. Sheltered from the North winds and open to the South, the proposed structure was to hold approximately 63,000 fans.   Ohio Stadium was the first horseshoe shaped concrete double decker stadium.  A horse drawn plow overturned the ground where the footers and foundation would be poured.  Trees were cut down and stumps were blown out with explosives.
The official groundbreaking ceremony was held on August 3, 1921.    In autumn of 1921, the first construction of the foundation was laid with steel superstructures following in January 1922.  Four cranes were used to pour concrete around the stadium’s steel superstructure.  One concrete arch was being poured each day for a total of 78.  The first game in the stadium was played that fall, with construction ongoing.  The game was against Ohio Wesleyan.
There are many architectural techniques that were used while building the stadium/ At the base is a slurry wall to keep out the water from the Olentangy River since the stadium is sitting on the flood plain. Ohio Stadium was built, unlike the Yale Bowl, to have an upper deck that hung over part of the lower decks, giving the stadium its “A”, “B”, and “C” decks. Unlike Harvard Stadium, double columns were designed that would allow for more space between columns. The rotunda at the north end of the stadium was given beautiful stain glass murals of the offensive and defensive squads that make up the football team. It was designed to look like the Roman Pantheon. 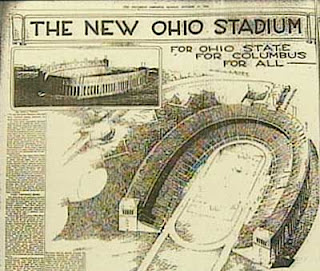 The stadium was formally dedicated October 21st, 1922, in a game against Michigan.  There were over 71,000 fans in attendance that were treated to 21-gun salutes and patriotic songs.  Vendors that day sold 10,000 hot dogs, 70,000 bottled sodas, 8,000 boxes of Cracker Jacks, 70 gallons of coffee, and 25 gallons of mustard. Unfortunately, it was one of the few times that Michigan can claim victory over OSU, 19-0.
The first of many modifications came in an infamous Michigan game.  In front of a standing room only crowd, Ohio State failed to stop Michigan’s passing game.  Michigan led 17-10 with two minutes left to play; Ohio State scored from the 12-yard run……and missed the extra point.  Over 90,000 Ohio State fans stormed the fielding breaking glass, breaking arms and legs and Ohio State banned standing room only fans.   That rule stayed in place for over 50 years.
In 1944, a University report to the State of Ohio for budgetary needs included a proposal for an octagonal building to be added to the stadiums north end.  In October 1944, the OSU Alumni Monthly said, “From any angle, the monstrosity looks screwy.”  It was relocated 500 feet north and is now known as St. John’s Arena.  On March 22, 1974, the Ohio Stadium was placed on the National Register of Historic Places, joining Oxley and Hayes Halls.
During the 70’s and 80’s, the stadium concrete was sealed and resealed.  In late 1995, administrators had $150 million for renovations.   With that $150 million, they built the Schottenstein center and in the summer of 2000, renovations began on Ohio Stadium.  The playing field was sunk to create a new seating deck to replace the track, the south end was enclosed and the seats above C deck were added.  The additions also included a 30 x 90 scoreboard.
After each victory, the victory bell rings for 15 minutes since it first rang on October 2, 1954.  It was a gift from the classes of 1943, 1944 and 1954 and was installed in in the southeast tower 150 feet above the field.  Members of the Alpha Phi Omega service fraternity ring the bell after victories.
In 1970, Astroturf was installed to support Woody’s running backs and running game.  A group of former OSU players that went onto discover the Geno’s drive-in chain would pay for the Astroturf with $380,000.00 of Geno’s stock.  The stock value of Geno’s was dropping and made the University support the project from its general fund.
In 1978, the Astroturf was worn out and was put out to bid.  Sections of the old turf were sold to support the new turf.    Injuries to players were happening at a high rate, so teams began to go back to grass. The initial cost was $1 million, with annual grounds keeping costs at $50,000.  The 2001 renovation had created an indoor climate and had shielded the sod from rain, sun and air.
Field Turf was installed in 2007 and the sod was given to the city of Columbus to be installed in three baseball fields.
Events held at the stadium now include tours of the stadium in groups of 10, movies on the big scoreboard, concerts such as the Rolling Stones, Buckeye Country Concert with the proceeds going to the Urban and Shelley Meyer Cancer Fund; and who could forget TBDBITL with their unbelievable half time shows.  At a game, never miss the ramp entrance of TBDBTL; and at the end of each football game, win or lose, never miss the singing of “Carmen Ohio”. 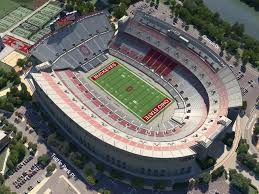 Graduation is held there each May with over 10,000 new Buckeyes joining the Alumni Association from the Shoe.  In 1997, shortly after the communication exercises had started on Friday, June 13, a downpour caused the ceremony to be cancelled.   Graduates waded in knee deep water in the end zone before heading over to French Field House to receive their degree.   President Gee noted that “one graduate remarked she wasn’t sure if she graduated, but was certain she had been baptized.”
In 2016, professors in Ohio State’s School of Earth Sciences and in partnership with Miami University and the Ohio Department of Natural Resources conceived a program to measure fan seismic activity in the stadium. Geologists planted sensors around Ohio Stadium to measure seismic activity with seismographs in the lower level of the stadium.   One result they were not expecting was TBDBITL caused the fan quakes to amplify.   The largest fan quake they recorded so far was triggered by Curtis Samuel’s touchdown catch at the beginning of the second half versus Nebraska on Nov. 5. The shaking lasted more than two minutes and reached a Fan Quake Magnitude of 5.2.
Another program underway at the stadium is that they are sustainable.  They are the largest stadium in the country to achieve zero waste status continuously.  That means they defer 90% or more of their materials from the landfill by recycling, repurposing and composting.   They are ranked #1 in diversion rate within the Big Ten conference for the past four years.  In 2016, the diversion rate was 95.4% and the season high diversion rate was 96.23% at the Michigan game.
The iconic stadium is currently undergoing a renovation project that will be completed in 2020.  The goal according to The Ohio State University is to “restore and re-coat the 94-year old concrete on C-deck, Upgrade power distribution systems for the east, west and south stands, Improve and upgrade B-deck to include better lighting, larger televisions, an improved sound system and better scoreboards, which will improve the experience of fans with obstructed-view seats, Renovate the premium seating area to consolidate the university suites into one University Suite and add 35 loge boxes and 12 luxury suites.” (www.ohiostatebuckeyes.com) 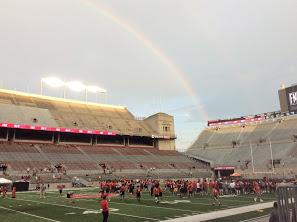 These renovatioms will ensure that Ohio Stadium will house other relevant non football events and continue to be the premiere location in America to watch college football.
From its humble beginnings in German Village and on Ohio field, to the current majestic Ohio Stadium, Ohio State football has a rich and glorious history.
There is no better place in the world to watch football and “Sing Ohio’s Praise.”
A very happy 95th Birthday to the 'Shoe.
Jenn Campbell
Posted by Nick Jackson at 9:33 AM