Carmen Ohio is more than a song – it’s a tradition that unites Buckeyes.  Carmen is Latin for “song” and Carmen Ohio actually means “song of Ohio”.  Many know the words and how to sing along, but don’t know its origins.  With Commencement soon upon us, let’s find out how Carmen Ohio became part of the Ohio State tradition.

The tradition started with the Ohio State-That Team Up North game in 1903.  Unfortunately, OSU suffered an 86-0 loss to TTUN1.   Fred Cornell, a freshman athlete at Ohio State was also a member of the Ohio State Glee Club.  Cornell was a four sport athlete.  In track, he ran relays, the 100 yard dash, low and high hurdles.  He was the starting center on the basketball team, starting shortstop on the baseball team and reserve end on the football team.2

On the train back to Columbus following the horrible loss and TTUN’s crowd stopping their post-game celebration to solemnly sing The Yellow and Blue, Cornell decided that Ohio State needed a song like that and scribbled the lyrics to a song for Ohio State on the back of an envelope.  He borrowed phrases from the Yale song, Bright College Years, which goes “The seasons pass, the seasons go, the earth is green or white with snow, but time and change shall not avail, to break the friendships formed at Yale.”

But, a more likely account supported by a 1910 article in the Alumni Monthly, had Fred himself saying that he wrote the piece in the fall of 1903, because the Glee Club was looking for an alma mater.  There were several entries submitted by women, and Cornell was urged by several other men to write something.

Cornell went on to a successful career in the automobile and shipbuilding industries.  In 1961, he received the University’s Distinguished Service Award for his composition.  He passed away in Florida at the age of 87.
Oh! Come let’s sing Ohio’s praise
And songs to Alma Mater raise;
While our hearts rebounding thrill,
With joy which death alone can still.
Summer’s heat or Winter’s cold,
The seasons pass, the years will roll;
Time and change will surely show
How firm they friendship O-HI-O.

The first public performance of Carmen Ohio was performed in December 1903 in the Ohio State House chapel for then Governor Judson Harmon.  On New Year’s Eve, the Glee Club shared the song with a small crowd in Lima, Ohio.  The words for Carmen Ohio appeared in The Lantern newspaper in October 1906 and on October 16, 1906, the words and music appeared in the program for the Ohio State-TTUN game.  Former Buckeyes coach Jim Tressel started a new tradition in 2001.  Following every home game, win or lose, the team gathers in front of the fans and joins the band, if they are available, and cheerleaders in honoring Ohio State by singing Carmen Ohio.  It is a tradition that current head coach Urban Meyer, along with his family, has continued.

These jolly days of priceless worth,
By far the gladdest days on earth,
Soon will pass and we not know,
How dearly we love O-HI-O.
We should strive to keep thy name,
Of fair repute and spotless fame,
So, in college halls we’ll grow,
To love thee better….O-HI-O!

In 1927, band director Jack Evans and arranger Richard Heine adapted Carmen Ohio for the brass band (TBDBITL) to play and added the sound of the bells from Orton Hall as the introduction.  Orton Hall was built in 1892, and the chimes were installed in 1915.  Orton Hall was placed onto the National Registry of Historic Places in July, 1970.  Orton Hall is named after Dr. Edward J. Orton, Sr., who served as OSU’s first President, Professor of Geology from 1873-1899.  It also houses the Orton Geological Museum.  The stone that makes up the Museum is from Ohio, with building stones arranged in stratigraphic order from the oldest at the bottom to the youngest toward the top.  The columns in the Orton Hall foyer recognize the 24 principal, 19th century building stones of Ohio.  In 1991, the Ohio State graduating class donated a monument, which is located on the southwest corner of the Oval, in the shadow of the bell tower.  Nine by five foot slabs of polished gray granite, with the words to Carmen Ohio are chiseled in stone.3 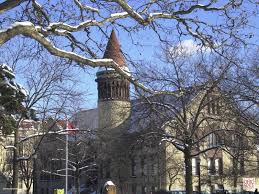 Tho’ age may dim our mem’ry’s store,
We’ll think of happy days of yore.
True to friend and frank to foe,
As sturdy sons of O-HI-O.
If on seas of care we roll,
‘Neath blackened sky , o’er barren shoal,
Tho’ts of thee bid darkness go,
Dear Alma Mater O-HI-O.
Carmen Ohio is sung after every sporting event, win, lose or tie and will stay in our Buckeye hearts forever.  Go Bucks!