Q:  Now you played defensive back a little bit in high school?

A:  I played both ways. My tenth-grade year I played both ways the whole game pretty much. My coach didn’t want me to get hurt. I didn’t play safety as much as I did previously, but my senior year I had about 10 interceptions and 28 touch downs.

Q:  How would you describe your style as a QB if you played today?

A:  I think my style now fits today’s style of ball. Maybe I might have been before my time. Now, most offenses don’t have a fullback. We ran the I-formation so you only had one back. I know I’d have been throwing much more than I would have with Coach Hayes. I know I would’ve been passing more and running the ball more too. I could’ve been like the kid at Louisville, which reminds me a lot of how I played.

Q:  Now when I watched film of you, you look fluid out there. A lot of QB’s look like they are thinking.

A:  My thing is I ran for touchdowns, and I didn’t run for first downs. I sit at home watching players today and think I’m in the end zone by now. I’d make you pay buddy.

Q:  Were you starting as the scout team QB your freshman year?

A:  As a freshman, I was the scout team QB and hated it because I wanted to be up with the rest of the guys. Later on, after I finished my career, and talking with the defensive coordinator, I didn’t realize what a good job I was doing to give the defense a great look. Once I moved up, and started, then I had to go against the scout team. In my mind, I didn’t care who I faced I had to punish them and just do the right thing and just be dominant.  The scout squad was that team that I was playing. If it was Minnesota, you had to dog them. You had to do them just like the team that you were going to play.

Q:  Talk a little bit more about you and Archie. Archie seemed like someone who would give the shirt off his back.

A:  We both share the same personality traits. We both were the 4th child out of 8.  Having the nickname of flamboyant and stuff coming up, seemed like I had a little more out there than he did, but I was very insecure. You know sports kind of puts you out there to make you a big person, but Archie and I were very insecure. We kind of liked staying in the background. We probably knew the answer to the question, but we weren’t the ones that would raise our hands.

Q:  What was Coach Hayes like at the start of your career?

A:  From the beginning, Woody got on my nerves. It was hard for me to kind of get to him, or like him, or want to be around him. He was just very tough. My freshman year it was evident that he was getting to me because I had to get examined by the team doctor and he told me I was number 5. I’d say, “Nah, Doc. I’m number 7,” and he’d say, “Nah, you’re the 5th quarterback Woody is giving the offense to.”

Q:  Now Woody seems to me to be colorblind, and that he ran a meritocracy; that if you are good enough to play you will play.

A:  Right. I think Coach Hayes went through a change of heart during the Martin Luther King era. People were protesting for civil rights, and equal rights and it just wasn’t African-Americans out there protesting. It was a little bit of everybody and I think Woody got caught up in that as well. I think he got caught up in the humanity of life, of how people were treated and that they weren’t treated properly. Obviously, he broke the color barrier because there never had been an African-American quarterback. There had never been an all-black backfield ever in Ohio State’s history when he played me, Pete and Archie at the same time. 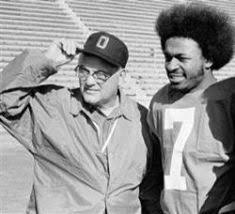 Q:  Were you the first QB to break the color barrier in the Big Ten?

Q:  Now I read somewhere that you went to Rod Gerald’s dad’s church in Dallas.

A:  This was amazing too. When we recruited Rod, I found out that Rod’s father and I had almost the same name. His name is Cornelius Howard Gerald, and I’m Cornelius Howard Green. How can that happen? Mr. Gerald ended up baptizing me. My Dallas Cowboy teammates, when we were down there in Dallas used to visit Reverend Gerald’s church as well.

Q:  Talk about your faith and what it means to you?

A:  My faith is everything. I was with the Fellowship of Christian Athletes at Ohio State. We made Coach Hayes conscious of our spirituality. We wanted to have 10 minutes before a game so that we could meet. He was all for it. We used to have maybe about twenty players. We would have special meetings where we would just share our faith and pray and we were very proud of that.

Q:  Now you dropped the “E” from the end of Green?

Q:   Talk about the 40th reunion and what it meant to you.

A:  Any time you get back with your guys, you kind of relive your life again. It’s amazing how you fall back in line, where if I was sophomore that year, then I act like a sophomore. What a joy it was. As we get older we’ve lost a lot of our teammates, so its just a blessing to be above dirt and be able to attend and be one of the guys still representing your team.

Q:  What do you think happened in the Iowa game this year?

A:  I think we just outclassed ourselves. Run that ball and it can keep the crowd out of the game. We just outdid ourselves; got behind then tried to play catch up. Look how we came out against Michigan State. Yes, we are in a passing era, but come on. We are known for thee yards and a cloud of dust, and I think we should never get away from that, especially since we’ve got such great running backs.

Q:  Finally, what are your thoughts on JT and his legacy in particular?

A:  I got to meet JT right before he made his first start, and we talked about it. I told him that the year Braxton got hurt was very similar to my first year. My sophomore year I didn’t think I was going to be starting before the season because Greg Hare was our team captain. I found out that I was going to start ahead of him just like JT found out he was going to start ahead of Braxton because of injury. I just told him you’re going to be a great quarterback and whatever you need I’m going to be behind you, and I’ve kept my word. I mean I love JT. Here is a kid that gives his all, does everything for the university, and he has one bad game and you want to tear him down. It just shows you the kind of kid he is, that he doesn’t let outside criticism get to him. He comes right back and just plays his heart out. What a great leader he is. I’m very proud of JT.

Cornelius continues to follow Coach Hayes teaching of paying it forward at the St. Alban's school in Washington, DC where he is the 8th grade coach for basketball, baseball and football.

Nicholas Jackson
Copyright 2017 Nicholas Jackson - All rights reserved.
Nick is a 1997 graduate of Ohio University, in Athens, Ohio where he received his B.S in Biological Sciences. He went on to receive his Master’s Degree in Physical Therapy at Andrews University in Dayton, Ohio and then his Doctorate in Physical Therapy from Chatham University in Pittsburgh. He has been published in the Newark Advocate, The Granville Sentinel, and the St. Louis Metro Voice; and professionally in the Journal of Acute Care Physical Therapy. Nick has also been a guest host on 88.9 WLRY and 880AM WRFD