On Tuesday night, Cornelius Green spoke about what it meant to be part of the greatest rivalry in all of sport at the 3rd Annual John Hicks Unlimited Love Event to benefit the Unverferth House, which houses families of  heart transplant surgeries. I caught up with Cornelius by phone where he discussed the rivalry, breaking the color barrier as the 1st African-American QB at Ohio State, and much more. 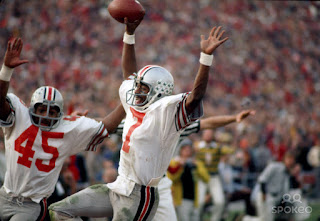 Q:  Talk about your upbringing in DC and your childhood.

A:  I was adopted and my biological father’s oldest sister, she and her husband raised me; which I ended up calling them my mom and dad, so it was actually my aunt and uncle that raised me from six months until I was a grown man. They passed on now, but they were pretty much my everything.

Q:  Did you have any role models growing up?

A: One of our neighbor’s nephews happened to be Willie Wood, who ended up being in the Hall of fame and was a DB for the Green Bay Packers. This neighbor used to always tell me as a kid that I reminded me of his nephew Willie Wood, so that was pretty inspiring.

Q:  Did Woody recruit you specifically as a QB?

A:  Yes, QB only. That’s what I wanted too. That was probably what I was a little nervous about because I was good on both sides of the ball, but my love was quarterbacking. Back in the day they didn’t have many black quarterbacks at all in college, so what was happening a lot of times was that once an African-American would go to a major big school, they ended up changing their positions to defensive back, and I didn’t want that to happen to me.

Q: What did being the QB at OSU teach you about leadership and life in general?

A: I was the pitcher of my baseball team, point guard on my basketball team and was the quarterback on my football team, so being a great leader was already instilled in me. I think that if you are going to be a good leader then show good leadership skills by being at practice and not missing practice. No matter what happened during that game on Saturday and no matter how beat up I was, Monday morning I was out there with my lineman and my team practicing. We used to tease Archie a lot because the difference between Archie and I, is that we were both beat up, but Coach Hayes would tell Archie that he needed to rest to recover. He’d tell me that I needed to go out there and I needed to work.

Q:  Being the first African-American QB at OSU, did you think about the significance of this at the time?

A:  One of my reasons for going there was that I could become the first African-American QB at Ohio State. I always thought about it and then once I got here it wasn’t a big deal until I think the town made it a big deal. I was receiving letters from the Klan and would get death threat calls over the phone my freshman year, so it was pretty devastating. It was tough but I persevered and survived. Once I started against Minnesota, and we won 56-7 the calls and all the letters just stopped all of a sudden. It’s amazing what winning can do.

Q:  Talk about your relationship with Archie when you were at OSU and what he meant to you?

A:  He meant the world to me. I was from Washington, DC being in Ohio, and here was Archie from Columbus, and I ended up being a member of his family and just like a brother. His mom and dad kind of adopted me as a son. What a great joy that was. My dad had drinking problems and stuff and then my uncle that raised me was blind when I was in the 8th grade so neither one had come to see me play a game.  Mr. Griffin would always be there for me after every game. I’d look up and he’d have his arm around me as well as having his arm around Archie, telling us both how great we did.

Q: What did the Team Up North rivalry mean to you?

A:  I got here my freshman year and I couldn’t believe we were practicing for Michigan during the summer and we didn’t play them until November; so I knew how this was a little different than anything I had ever experienced in my life before. We were practicing against the Michigan defense and we would go so far that the scout squad had to actually wear Michigan uniforms. It was everything. I never lost to them.

Q: What are some other tactics that Woody used to get you guys ready for Michigan?

A:   His main tactic was that each week we were concerned about Michigan. If we thought a team was weak, like Indiana back in the day; I hate to talk about Lee Corso in this manner, but we would practice for Michigan Monday and Tuesday, and then practice for Indiana Wednesday, Thursday and Friday.

Q: Talk about your experience against the Team Up North your freshman year?

A: We beat them 14-11. I was watching the game and I was dressed, but of course I didn’t get in the game.  That was probably one of the greatest games because my freshman year we had four different goal line stances with Bo refusing to kick a field goal. If they kick four field goals they win the game, but he refused to kick and we stopped him four times. It was insane what he was doing.

Q: Talk about the tie game your sophomore year.

A: My sophomore year we played Iowa at home and when I was pitching the ball on an option the defensive end jammed my right thumb. My thumb was so swollen all week that I really couldn’t pass much all week in practice; so, the 10-10 tie game my sophomore year Woody didn’t attempt any passes the whole game but one time. He took me out of the game with three minutes left, and put in Greg Hare who was our captain; and then he tried to pass and the first pass Greg threw was an interception.

Q: What were your feelings after the tie game, did you think you would get the nod?

A: I didn’t know how that worked. I was just so upset that it was a tie game. They were jumping up and down like they won the game. In my mind, I was thinking we had just gone to the Rose Bowl the prior year and I said wow I’m thinking that they were going to get the nod automatically. I didn’t know there was a vote that went on with all the athletic directors from all the Big Ten teams. I just knew we were going to the Rose Bowl and I didn’t know how it happened until 40 years later when they did the documentary. We always said the right team went because we went out there and won. When we had our reunion, we made sure that was stated.

Q: When did Woody start trusting your arm more?

A:  Things changed in the Rose Bowl. I redeemed myself and I was MVP in the Rose Bowl as a sophomore. I hit some key plays and then all of a sudden that next year there was a big trust factor.

Q: What was your most memorable Michigan game?

A: My senior year, that’s probably my most memorable Michigan game. They kicked off to us and we went right down and scored a touchdown, and we went up 7-0.  They stopped us from getting a first down from mid first quarter to the end of the first quarter. The second quarter we were stopped. The whole third quarter we didn’t get a first down. Now, we are going into the fourth quarter down 14-7 with seven minutes left and it was a 3rd and 18 on the twenty-yard line. I got the team together and said, “Hey I’m going to say a prayer,” not for us to win, but because we kept coming up like 4th and 1.

Q: You were in your own territory at that point?

A: Yep, 3rd and 18 and backs against the wall and I was shocked we called a pass play.  For me to throw a perfect pass and the pass was completed after I said the prayer, it was amazing, and then we got four first downs right in a row. I completed two more passes for first downs. It was 4th and goal at the one and we finally scored. We tied the game up, then Ray Griffin intercepts the pass with about two minutes left and we ended up winning 21-14.  I ended up being the game’s most valuable player.  I can just remember so vividly when the interviewer was congratulating me for a great game, I said no we’ve got to give the Lord the credit because I told him about this prayer I said. The first down prayer was answered and it was just an amazing feeling.

Q:  Talk about some of the friendships you developed at OSU and how they impacted you.

A: My friendships at OSU have changed my life because when I grew up here in D.C it was 98 percent African-American.  Going to Ohio State was my first experience of having predominantly white friends. Brian Baschnagel was my roommate and ended up being my best friend. I think Brian changed my life by being such a great friend and teaching me that everyone was the same. You just had to get to know folks, you couldn’t stereotype someone. He made me a better person and made me the person I am today.

Q:  Do you have a favorite memory of Woody?

A: My favorite memory now is probably one of the last memories I have, because I started my career against Minnesota.  My first home game was against Minnesota my sophomore year, and my last home game as a senior was against Minnesota. Right at the end, Coach Hayes took a penalty for too much time. He took the penalty so that the fans could give me a round of applause, thanking me for my four years I had at Ohio State; and then he came to greet me on the field and shake my hand. That was overwhelming.  Right after that he substituted for Archie. It was just so uncommon of Coach Hayes. You never thought he would do something like that. Man was that showing you how much he loved you and appreciated you.

Nicholas JacksonCopyright 2017 Nicholas Jackson - All rights reserved.
Nick is a 1997 graduate of Ohio University, in Athens, Ohio where he received his B.S in Biological Sciences. He went on to receive his Master’s Degree in Physical Therapy at Andrews University in Dayton, Ohio and then his Doctorate in Physical Therapy from Chatham University in Pittsburgh. He has been published in the Newark Advocate, The Granville Sentinel, and the St. Louis Metro Voice; and professionally in the Journal of Acute Care Physical Therapy. Nick has also been a guest host on 88.9 WLRY and 880AM WRFD