Heart of a Buckeye, The Jacob Jarvis Story, Part 2

“Then David said to the Philistine, “You come to me with a sword, with a spear, and with a javelin. But I come to you in the name of the Lord of hosts, the God of the armies of Israel, whom you have defied. This day the Lord will deliver you into my hand.” 1 Samuel 17:14

Jacob Jarvis, one of the most beloved Ohio State football fans in all of Buckeye football fandom, knows what it’s like to face down the Goliaths in his life. Jake deals with the Goliath of Duchenne muscular dystrophy every day. 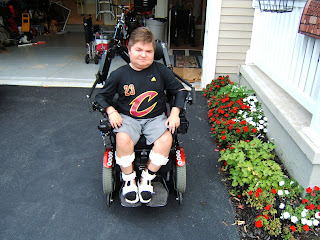 Facing the Giants is an action packed, Christian sports drama directed by and starring Alex Kendrick. Jake professed that he watches Facing the Giants whenever he is sick or discouraged, to lift his spirits. Grant Taylor, the main character in Facing the Giants, has coached the Shiloh Eagles to a losing season for six straight years. Taylor learns that a group of fathers have secretly been working behind the scenes to remove him as head coach. Coach Taylor, facing these twin giants of fear and failure, cries out to God in desperation, and vows that win or lose he will give God the Glory; that he will challenge his players to give their very best, believe the impossible, and leave the outcome up to God.

Jake’s favorite scene in Facing the Giants is in the Georgia state championship game where the Shiloh Eagles are going for the winning 51-yard field goal with time expiring. With then Georgia Coach Mark Richt in the stands, their 145 lb., undersized kicker David Childers, is poised to win the game. Full of self-doubt, his longest field goal he has ever made was a 39-yarder. David’s father, a paraplegic, cheers on his son from the end zone. In this final climatic scene, David’s father stands up from his wheelchair and holds up his arms to inspire David to do his best, and praise God no matter the outcome. 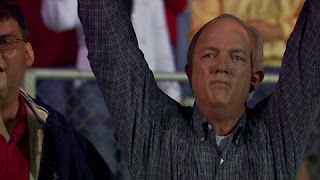 Chad and Tracy Studebaker, Jake’s parents, were facing giants in their own life. The Studebakers wanted to have another child but were afraid that the child would end up with Duchenne MD. With a 25 percent chance that their child would also have Duchenne, they wrestled with the decision in prayer. They decided as a family to have another child and put the outcome in God’s hands. Noah is now an active, joyful and intelligent 9-year-old. Noah also has Duchenne MD but it isn’t as aggressive as Jake’s. 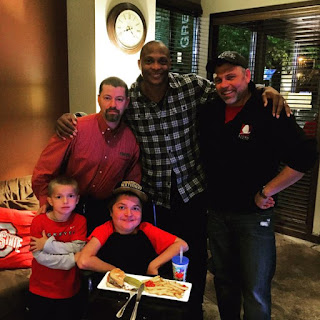 Most young people afflicted with Duchenne Muscular Dystrophy lose their ability to walk from the ages of about 10 to 14. Jake started to lose his ability to walk at the age of around 14, as he entered the 8th grade. In kids with DMD, the Achilles tendon becomes very taut and contracted, impeding the ability to walk. In consultation with their team of physicians, Jake and his family decided Jake should have a heel cord lengthening procedure in hopes that Jake would be able to walk for as long as he could, before needing a wheelchair.

The surgery was a success and Jake could walk for longer than he would have, had he not had the surgery. The surgery, however, would only help for so long as it got harder and harder for Jake to walk without great pain and struggle. As Jake gradually lost the ability to walk, his step-father continued to push Jake to give his very best. Internally, Jake was striving to walk for as long as he could; but it got to the point where it was just too difficult.

Jake and his stepfather both had to come to grips with the fact that relenting and choosing to use a wheelchair as their primary means of mobility was not a sign of failure, but a wise decision based on acceptance and realism. About the time Jake had decided to use a wheelchair permanently, he fractured his ankle.

Around the same time Jake had the leg fracture, all his equipment came that Jake would so desperately need. The power wheelchair and elevator to be able to leave the house, arrived just at the right time Jake needed it the most.  Looking back, Jake’s step-father could see how God’s hand was upon them even at a time when things seemed the bleakest. Chad exclaimed, “We could see that God was working even then.”

Jake on his stair lift that was gifted to his family. 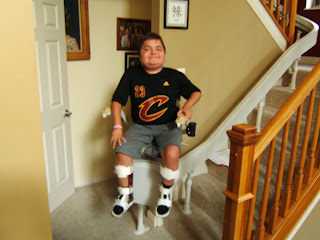 Even with the bright spot of getting all the new equipment, however, Jake was struggling. In a wheelchair for the first time, Jake became very self-conscious as anyone would at that age. Jake was facing some difficult times at school as his eighth-grade classmates were being typical eight graders and making fun of him. To use Jake’s words they were, “very disrespectful.”

Having endured a painful surgery, an injury, the loss of the ability to walk, and the ridicule and scorn of classmates, things seemed bleak for Jake. Little did he know, that on a fateful day in July of 2013, Jake would have an encounter with a person who would change his life forever, and help catapult him into the annals of Buckeye history.

On the invitation of former OSU lineman Kyle Trout’s family, Jake and his stepfather went to Friday Night lights, a recruiting event held every year in Ohio Stadium. While taking in the action, Urban Meyer noticed Jake among the throng of onlookers. Jake exclaimed that he wasn’t nervous, but rather he was excited to meet him. In his words, “Coach Meyer noticed a spark in my eyes.”

Jake loves Tim Tebow, the former Florida Gator who played for Urban Meyer, and helped lead them to two mythical national championships.  It was to Jake’s delight that Urban showed him how to throw like one of his heroes.  With hundreds of high profile recruits that day in Ohio Stadium, Urban took the time to invest in Jake, a boy he had never met, and give him the experience of a lifetime. Jake’s adventure would not end there, as Urban suggested that Jake and his stepfather should come back to watch practice. It was an offer they couldn’t refuse. 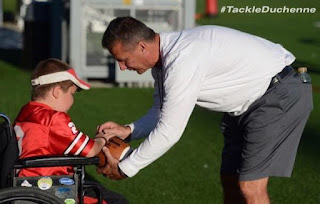 Mr. Studebaker and Jake arrived early for practice and the buzz was palpable. As they got out of their car, the first people they saw were former OSU coaches Earle Bruce and John Cooper. Like Jim Tressel before him, Urban encourages former OSU players and coaches to be around the program, building much needed program stability and continuity.

Jake and his stepfather were taking in the practice in a roped off area along with hundreds of other parents and onlookers. Much to their surprise, Urban motioned Jake and his stepfather to come over to talk with them. Was Urban motioning someone else? Chad and Jake couldn’t believe it. Urban even remembered Jake’s name, and they chatted for a few minutes. Coach Meyer then invited them to come into the Woody for a tour of the facilities.

Mark Pantoni, Director of Player Personnel, along with strength coach Mickey Marotti were arguably Urban’s greatest hires when he accepted the OSU job. Instead of delegating it to an assistant, Mark took it upon himself to personally take Jake and his stepfather around on a tour of the Woody. After a tour of the facility, Mark invited them into the offensive war room as the OSU coaches broke down film from that day’s practice, as they did after every practice.

Chad and Jake joined the film study, along with former offensive coordinator and current Texas Coach Tom Herman, Coach Tim Hinton, Ed Warinner and Urban Meyer. Chad and Jake couldn’t believe what was happening. Here was Urban Meyer, arguably one of the greatest coaches in college football history, sitting with his shoes off and feet propped up, while he and the others of the OSU offensive brain trust offered their assessment of the day’s events. Coach Herman, holding the remote, moved quickly and efficiently through the practice film, even taking the time to point out Jake on the sideline. “There’s Jake on the sideline,” Herman exclaimed.

Ever since that first practice, Jake has become a part of the OSU family, and a fixture at OSU practices and games. Being welcomed that first time by Urban Meyer, opened the opportunity for Jake and his family to build lasting friendships and to witness some of the most profound and iconic moments in OSU history. 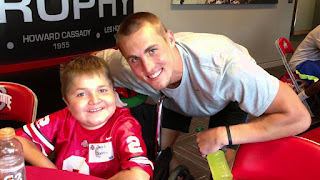 Many would be content with watching a Buckeye practice, touring the facility, watching film and meeting Coach Meyer; but Jake’s story wouldn’t stop here, it was just beginning. Jake was about to embark on one of the greatest journeys a boy could take. Having faced down his giants, Jake was about to become an OSU legend, and a part of Buckeye history forever.