Quarterbacks: Write JT Barrett in at the number one QB spot in black permanent marker. Barring injuries, JT will add to his already many OSU career passing records. JT is battle tested and will thrive under the tutelage of Ryan Day and Kevin Wilson. JT performs better with tempo and he will look more like the 2014 model than the 2015, and 2016 models. One important thing to note is that JT has already graduated and is taking a few online classes this season. He can devote many more hours to his craft, unencumbered by a busy course schedule.
JT will be backed up by Joey Burrow and Dwayne Haskins. To be honest, I have no clue who will be the backup yet. I would give the slight edge to Joey Burrow who has more game experience and command of the offense, but Haskins is no slouch. Look for Tate Martell to redshirt.


Offensive Line: OSU returns 4 returning starters in Michael Jordan, Jamarco Jones, Billy Price (shifting to center from Guard) and Isaiah Prince. Look for all four to make leaps this year. I’ve heard rumblings that Isaiah Prince was playing with a significant injury last season, so look for him to make a big jump as well. Right guard is the only unsettled positon up for grabs. My gut says that Matthew Burrell will win the spot. He has rededicated himself both on and off the field and looks the part of a starting guard for OSU. Malcolm Pridgeon, Demetrius Knox, Branden Bowen, Josh Meyers, Wyatt Davis, and Thayer Munford are all in the mix and will provide valuable depth.

Matthew Burrell with a throng of admirers at Friday Night Lights: 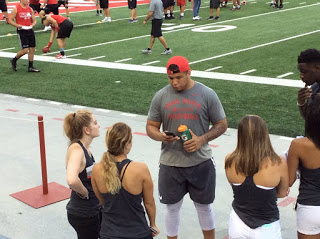 Running Back: Mike Weber will look to add to his solid number s last season. He is stronger and faster and will look to improve his pass catching as well to prepare himself for the NFL. Number two running back right now appears to be JK Dobbins but Demario McCall is no slouch either, and Antonio Williams will be in the mix after being slowed somewhat with injuries.
H back: Look for Parris Campbell to take over in the newly christened, “Curtis Samuel position.” I could see Demario McCall working in here as well, when not at running back. KJ Hill and Eric Glover Williams will add needed depth.

Receivers: Kevin Wilson wants 8 receivers to be game ready, so Zach Smith will be charged with making this happen. Urban Meyer said this class has the highest work ethic and character he has ever seen so the ceiling is high. Receivers look to be Terry McLaurin, KJ Hill and Johnnie Dixon as long as he can remain healthy (praying for you young man). Bin Victor and Austin Mack are right in the mix as well, they just need to demonstrate more consistency. Talented freshmen Jaylen Harris and Trevon Grimes look to be the wildcards who can play the outside and inside positions.

Tight Ends: Marcus Baugh will have a firm grasp on the tight end position as long as he stays healthy (He had a walking boot on at cam but that appears to be more precautionary). Jake Hausmann and Luke Farrell will battle for the backup spot. The general feeling is that Luke Farrell may have a slight lead but we will know more after Saturdays scrimmage.

Defensive Line: This is the strongest position on the team and games are usually always won in the trenches. Larry Johnson returns a plethora of lineman including his famed Rush Man package of Nick Bosa, Sam Hubbard, Tyquan Lewis and Sam Hubbard. It gets a little murky after that. The nose guard Michael Hill is suspended indefinitely. Any combination of Tracy Sprinkle, Dre’mont Jones, Nick Bosa, Sam Hubbard, Jalyn Holmes and Tyquan Lewis will fill out the rest of the D-Line with Chase Young and Johnathan Cooper providing depth. 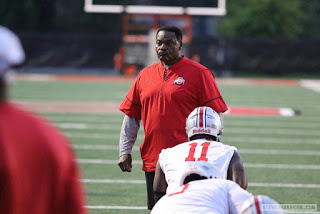 Linebackers: The Bucks appear to be solid at linebacker with Chris Worley shifting to middle linebacker, and Dante Booker and Jerome Baker filling out the two outside linebacker spots. Justin Hilliard, Keiondre Jones, and Malik Harrison will provide depth as well. The strong defensive line should give the linebackers ample opportunity to fill the gaps in run support and pass defense if needed. The linebackers won’t need to take a lot of chances with such a strong D Line in front; but Schiano and Davis will assuredly have the linebackers attacking and aggressive, while maintaining sound gap integrity.  Billy Davis’ corps will not miss a step as he continues to mold them into the key middle chamber of the Silver Bullets.

Cornerbacks: Denzel Ward was a de facto starter last season as he was heavily involved in Kerry Coombs cornerback rotation. There is a good chance Ward will be the next first round NFL draft pick churned out by Coach Coombs. Damon Arnette looks to be the next corner besides Ward. JUCO transfer and former five star cornerback prospect Kendall Sheffield will look to be heavily involved in Coombs rotation, perhaps even more than Ward was last year.  5 star corners Shaun Wade and Jeffrey Okudah will look to make an impact on special teams, but may be too talented to keep on the sidelines.

Safeties: Damon Webb appears to have the first safety spot locked down and Jordan Fuller and Erick Smith are battling it out for the second safety spot. I’m leaning towards Jordan Fuller capturing that second spot with Erick Smith in the mix as well (though he has been battling injury). Schiano may opt to rotate the safeties more like Coombs does with his corners. Jahsen Wint will be available as well.

Field Goal Kicker: Sean Nuernberger looks to be the starting field goal kicker.
Punter: Drue Chrisman looks to be on the fast track to lock down the starting punter position. It will certainly be different not having an Australian rugby style punter back there anymore.

Kick Returner: Parris Campbell Jr. has this spot nailed down
Punt Returner: KJ Hill, Kendall Sheffield, and Demario McCall will all battle for the return duties but it’s too early to project the starter. Whoever has the best hands and ball security will probably win the job. My vote is for Demario McCall.

The situation is fluid and the depth chart will likely have some changes as we approach the season opener. We will certainly know more after the Buckeyes scrimmage on Saturday and I will revisit the position battles before the first game, so stay tuned. Let’s turn our attention now towards one of the great traditions Urban Meyer has brought with him and implemented at Ohio State, players losing their Black Stripe.

At OSU, winning is everything. However, the freshman at OSU don’t earn their stripes, they lose them. According to an article on stack.com, When Urban Meyer coached at Bowling Green he introduced the practice of having all freshmen members of the team wear a thin, black strip on their helmets. Freshman had to take care of business both on the field, in the class room, and in the community to have their black stripe removed. Meyer told the Columbus Dispatch, “I wanted to put them through a ritual to become a member of the team, but not to allow hazing and silly, dangerous stuff. They had to earn the right on the football field and by being accountable.” (Losing Your Black Stripe: inside One of Ohio State Football’s Coolest Traditions, Stack.com, Aug. 19, 2016)

An upperclassman adopts a freshman and cultivates this spirit of accountability.  When the freshman has shown that he has earned the right to lose his black stripe, a ceremony is held. It’s a cause for celebration.

In this current recruiting age we live in, where top prospects are wined and dined and showered with adulation and praise, oftentimes they need “de-recruited.” The black stripe tradition aids in this de-recruiting process and fosters accountability and cohesion between the young Bucks and their veteran mentors. The tradition of the Black Stripe looks to be joining a long list of time honored Buckeye traditions such as Buckeye leafs on the helmet and singing Carmen Ohio after every game.

This year, age is no longer an excuse. As Urban Meyer so eloquently put it in his presser, “Last year, we were the youngest team in college football, and this year, we’re not.” OSU has a solid mix of returning veterans and an extremely talented group of freshman, and sophomores. With the addition of a new Offensive Coordinator, QB coach, and Linebackers coach, the team is filled with quiet optimism as they are poised to make a run for the playoffs and to hoist that national trophy again.  Freshmen are champing at the bit to shed their black stripe and contribute in any way they can, whether it be in the rotation or on special teams. I also have a strong feeling that new offensive coordinator Kevin Wilson is looking to unleash holy wrath on his former team in Bloomington.