Last Thursday, while fans were enjoying the beautiful yet often mercurial Ohio summer weather, OSU football players and coaches were hard at work. Training camp started at 6:30 AM and thus began the 29 preseason practices preparing for the rigors of a full season, but most especially for Aug. 31st in Bloomington, Indiana. The Chase, The Grind, whatever we are calling it, has begun but there are some key differences this year which we will unpack first, before we tackle the depth chart.

The result of this rule change is that teams need to start training camp a week earlier in order to hit the magic number of 29 preseason practices.  Extending training camp from 4 weeks to 5 weeks takes up more of the student athlete’s time and may lead to burnout before the season even gets going.  Urban Meyer weighed in on the rule change, “So one choice is to bring the players in earlier, and I am so -- that breaks my heart because I don’t want these players to take more of their time,” Meyer said. “However, how do you get ’em ready? That’s what we’re fighting through right now, so it’s a major impact.”  (Urban Meyer forming practice plan minus two- a-days, Tim May, Columbus Dispatch, June 3rd, 2017).

Pat Fitzgerald, the Northwestern head coach weighed in as well, ““I don’t recall having contact in our second practice in maybe seven or eight years at our place,” he said. “So I would have loved to have had the opportunity to say, ‘Let’s keep the calendar the same.” “Instead we say you can’t go out and run around twice, even though my third-grader can go have recess twice. We can’t go have recess twice and play football, which is mind-boggling to me.” (NCAA tone-deaf in eliminating two-a-days from college football practice, Graham Couch, Lansing state Journal, July 27, 2017)

QB coach Ryan Day: Day was hired to replace Tim beck, who took the job as QB coach with former OSU assistant and current Texas Coach Tom Herman. Day is a rising star in the coaching world and is tasked with maximizing 5th year senior JT Barrett’s potential as well as preparing JT’s understudies for spot duty or if the worst happens, and JT is injured. From what I’ve gathered, Day was able to come in right away and fix some lingering footwork issues JT had been having left over from the previous regime. Sometimes all it takes is a new set of eyes.  We will unpack the QB issue a little bit more when we examine the depth charts and position battles.

Offensive Coordinator Kevin Wilson: Kevin Wilson arrives from Indiana and is tasked with breathing new life into the OSU offense which had become a bit predictable and stagnant. Wilson is a homerun hire.  Expect major upgrades in OSU’s offensive tempo this season. No more delay of game penalties like we had last year, because we will have one decision maker instead of three.

Look for two good running backs to be featured this season as well. Tony Gerdeman of the Ozone looked at Wilson’s Tailback usage in his last few years at Indiana and if they had two capable backs available, they used them. Wilson spoke on the subject, “I think you need more than one tailback that’s ready to play because the volume of plays you get, the volume of practice you get,” Wilson explained. “You look at the elite pro teams and they’ve got their one-two punch, especially if you’re a tempo team trying to get plays, you can have so many plays you wear guys out. That happens with practice, everything we’re doing right now in preseason practice will have an effect on this team in November.” (Kevin Wilson Looking for a One-two Punch at Tailback for Buckeyes, Tony Gerdeman, Ozone July 31,2017)

Ryan Day coaching up the QB's. Photo Courtesy of @AndrewMLind of www.elevenwarriors.com 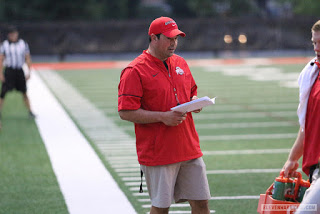 Linebackers Coach Billy Davis: Billy Davis steps in at linebackers coach to replace Luke Fickell who assumed the head coaching job at the University of Cincinnati. I don’t expect much of an adjustment here for either the coaches or the players. Davis has a wealth of knowledge from his previous stints in the NFL (list teams). He spent last year observing the ins and outs of the OSU program so he has been able to hit the ground running this year as linebackers coach. There has not been a drop off in recruiting either as Davis has already helped land two top linebacker prospects in Teradja Mitchell and Dallas Gant. 4 star LB  K’Vaughan pope is set to announce on August 4th where he will be attending college. There is an excellent chance Davis will be adding his 3rd 4 star linebacker to the already loaded 2018 class. 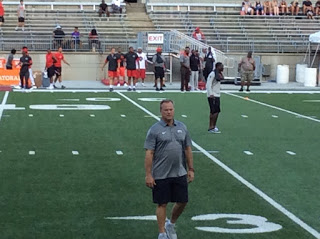 One more thing to note: Greg Schiano has taken on an expanded role as defensive coordinator for the upcoming season with Fickell’s departure. Fickell was somewhat conservative as coordinator. There is a good chance Schiano will institute a more aggressive and attacking style while utilizing more blitzes and stunts as well.

Now that we’ve done a little housekeeping with the rule change and coaching changes, let’s dive right in and look at the changes in the OSU lineup and depth chart this year. We will then look at a tradition Urban Meyer has brought to OSU from his previous coaching stints.