Discover Christian Church Holding its Annual Cruisin' for a Cause on September 17th, to Benefit Duchenne Muscular Dystrophy

If you visit Discover Christian Church’s website www.discovercc.org you will see their motto on the front page “Love God, love people, and impact the world.” With a modest estimate of around 800 members in their congregation, DCC takes this slogan to heart. Nothing can be more evident of this love for their community, than their annual Cruisin’ for a Cause car and truck show held every September.

Since 2010, Discover Christian Church has been paying it forward in their community with their annual event. Originally, it started out as a fundraiser to help with hurricane ravaged Haiti (Hot Rods for Haiti) and has grown every year, becoming what it is today, a well-oiled machine and the “Best Little Show” in central Ohio. DCC members Alec Carpenter, Tom Adams, and Donnie Kinkead have all been instrumental in C4C's success. The last couple years, Cruisin’ for a Cause has helped raise money for first responders. This year, C4C is tackling a cause that really hits home, Duchenne Muscular Dystrophy. 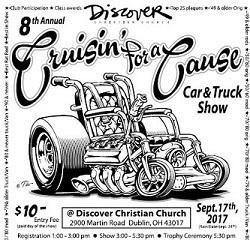 Duchenne muscular dystrophy (DMD) is the most severe type of muscular dystrophy. Symptoms of voluntary muscle weakness usually being around the age of four, and progressively worsen over time. Muscle weakness starts in the upper leg and pelvic muscles, and progresses to the upper arms and shoulders, eventually affecting the head and neck. Heart and respiratory muscles are impacted as well. Children with DMD lose the ability to walk generally between the ages of 10-14 and life expectancy is currently estimated to be in the low to mid 20’s.

Buckeye fans around central Ohio will recognize the name Jacob Jarvis. Jake, a member of DCC, is a young man with Duchenne muscular dystrophy who was adopted as an honorary Buckeye in 2014. OSU head coach Urban Meyer saw the spark in Jake’s eyes when he was on the sideline at an OSU practice in 2014. Jake was named an honorary captain at the OSU Cincinnati game, attended the 2014 OSU national championship game, and scored a touchdown this year in the annual spring game in Ohio Stadium.

Jake with the final TD to cap off the 2017 spring game. 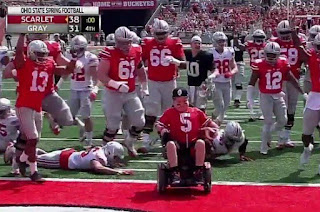 Folks who know Jake, may not know that he has a younger brother, Noah.  Noah is nine years old and has DMD too. He undoubtedly has a tough battle ahead, as he is in the early stages of DMD’s progression.  Along with Jake and Noah, there is another boy at DCC with DMD, Levi Rhodes. Levi is in his early teen years, and is facing many of the same challenges Jake and Noah are. 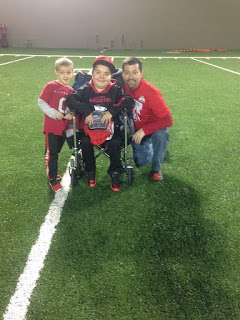 As any parent with a debilitating disease can attest, medical costs can be through the roof. A family with a child who has DMD, faces thousands and thousands of dollars of expenses throughout their child’s lifetime. A family can expect to incur regular costs for medical appointments, medicine, travel, new equipment and existing equipment modifications. The costs to put it bluntly, are astronomical.

This is where Discover Christian Church steps in; all proceeds of this year’s Cruisin’ for a Cause will go to one of the leading organizations in the fight to end Duchenne, Parent Project Muscular Dystrophy  DCC will use strict accounting procedures and maintain complete transparency throughout. If you are unable to attend, donations can be made directly to Discover Christian Church and then the funds raised will go directly to Parent Project Muscular Dystrophy. Please specify Cruisin’ for a Cause in the memo when making your donations.  Now that we’ve laid out the background information on the event, let’s get into the logistics of it and what people attending can expect to see.

Cruisin’ for a Cause consists primarily of a car and truck show where people from across Ohio will bring their vehicles to be judged. Cars and trucks in the show will be parking in the church lot, whereas regular attendees can park in the Meijer parking lot next to the church. There is no admittance fee for folks attending the event.

Custom made, hand crafted trophies made by Alec Carpenter at Ark Hotrods, will be rewarded to the worthy victors.  If you’re not into cars and trucks, don’t worry, there is something there for everyone. Vendors from all over will have tables set up, and there will be a craft show and a silent auction. This is a family friendly event so there will also be good food, music and all sorts of fun for families, with children of all ages.

T-shirts will be available for $15, with proceeds going to Parent Project Muscular Dystrophy 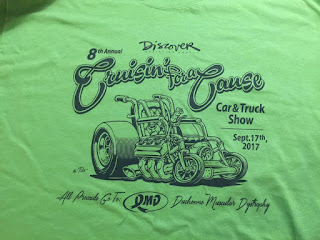 Some folks may have misgivings about it being a “church sponsored event,” so let me allay any fears or misgivings you may have. People of all faiths and backgrounds are welcome, those with a religious affiliation and those without one. There is no dress code so wear whatever you feel the most comfortable in. We will all be united together for one common cause, and that’s to raise money for the battle to end Duchenne.

Lord willing, Will Robinson, a dear man from Portsmouth, OH will be bringing his little one Brilyn who happens to have DMD as well. You can read about him and his story in this wonderful article by Nikki Blankenship in the Community Common. http://www.communitycommon.com/news/3764/sharing-the-love

Brilyn and his father are both big Buckeye fans and would love to someday go to an Ohio State practice and meet Urban Meyer and the team. At the very least it will be good for Mr. Robinson to meet other families going through the same struggles with DMD that they are (iron sharpens iron).

Will Robinson, chef at Patties and Pints. Photo courtesy of the Community Common 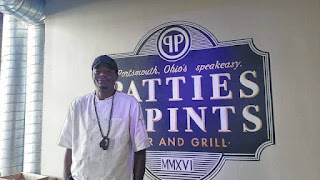 Lastly, Jake’s step-father Chad Studebaker will be speaking at the event. He is a man of great wisdom with a huge heart for those with Duchenne. You don’t want to miss the chance to hear him speak, and to meet him and his amazing family.

Jake, Noah and his parent's, Chad and Tracy Studebaker 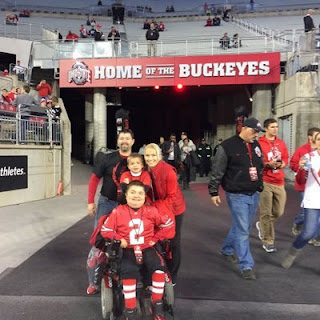 Luke 14:13 says, “But when you give a feast, invite the poor, the maimed, the lame, the blind and you will be blessed, because they cannot repay you.”

On September 17th, we want everyone to come. Let’s do something for people who cannot repay us, for that is a blessing in and of itself.